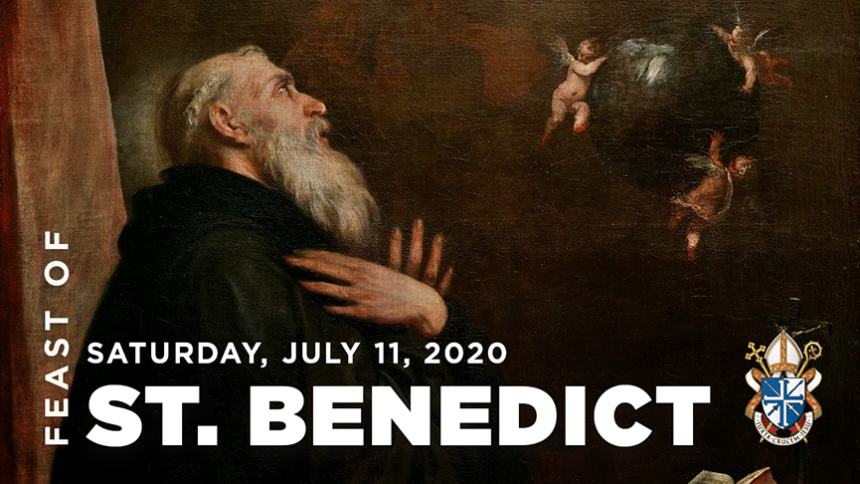 Today is the Feast of St. Benedict (480 – 543 A.D.). Happy feast day! A native of the Umbria on the Italian peninsula, St. Benedict’s life coincided with the fall of the Western Roman Empire and the rise of the Dark Ages across the continent of Europe. Benedict’s response was to create small communities rooted in piety, learning and civility that could sustain themselves through the cultural murk. Thus, was born Western monasticism. Thus, was sown the seeds of a new civilization: Christendom.

Amid our increasingly post-Christian society, many Catholics, and others, believe there is a modern parallel which also requires the creation of small communities of faith and reason in the 21st century that are capable of both weathering the present cultural tumult and of fostering a new civilization of love. Father Steve Mattson, Pastor of the Church of the Resurrection in Lansing, is one such person who is drawn to the concept of the “Benedict Option” as he now explains:

“As we celebrate the Feast Day of St. Benedict, founder of Western monasticism, I am reminded of the great role he played in preserving Catholic, Christian culture in our world. In these challenging times, I can’t help but reflect on things from the perspective that Rod Dreher lays out in his 2017 book, The Benedict Option: A Strategy for Christians in a Post-Christian Nation,” writes Father Mattson, July 11. He continues:

“Dreher summarizes his project as follows, drawing inspiration from the work of the philosopher Alasdair MacIntyre, who in his 1981 book, After Virtue:

“. . . declared that Western civilization had lost its moorings. The time was coming . . . when men and women of virtue would understand that continued full participation in mainstream society was not possible for those who wanted to live a life of traditional virtue. These people would find new ways to live in community, he said, just as Saint Benedict, the sixth-century father of Western monasticism, responded to the collapse of Roman civilization by founding a monastic order.”

“[In my book, Crunchy Cons] I called the strategic withdrawal prophesied by MacIntyre “the Benedict Option.” The idea is that serious Christian conservatives could no longer live business-as-usual lives in America, that we have to develop creative, communal solutions to help us hold on to our faith and our values in a world growing ever more hostile to them. We would have to choose to make a decisive leap into a truly countercultural way of living Christianity, or we would doom our children and our children’s children to assimilation (Rod Dreher, The Benedict Option, p. 2).”

Dreher argues effectively for the need to create communities of faith that support each other in the pursuit of the good, the true, and the beautiful, and he offers snapshots of what “Benedict Option” communities look like in various places around the world. He is not recommending that we pull out of culture, but rather take seriously the importance of finding ways to help our children and our children’s children be formed in the values and virtues of Christian life.

As a parish in the heart of the city, we are prayerfully discerning how best to foster a genuinely Catholic culture to help families stand strong in the faith. Our early efforts of pursuing the good, the true, and the beautiful in our school and parish have included poetry groups, Irish Country Dance evenings, lectures on the good, the true, and the beautiful, and more Classical Curriculum in our school.

We know we have more work to do in light of recent unrest across our nation, and decisions by the Supreme Court, but we take inspiration from Rod Dreher’s book, and will be working to develop our own version of the “The Benedict Option” suitable in the City of Lansing. The challenge is real, and our responsibility to be salt, light, and leaven in the world remains.

Dreher himself states the importance of Christian witness very well, and we echo his call for ourselves, and believe that all Christian communities will need to implement some version of the “The Benedict Option” in order to be who we are as the 21st Century Church:

“If we are going to be for the world as Christ meant for us to be, we are going to have to spend more time away from the world, in deep prayer and substantial spiritual training—just as Jesus retreated to the desert to pray before ministering to the people. We cannot give the world what we do not have. If the ancient Hebrews had been assimilated by the culture of Babylon, it would have ceased being a light to the world. So it is with the church.” (Dreher, p. 19)”

Have a happy and holy feast day! St. Benedict, pray for us!